MineSweeper3D is a 3D version of the original Windows Minesweeper computer game. It was written by Robert Webb and first released in 2003. The tiles are still essentially 2D, but wrapped around a large variety of 3D shapes. In addition to the traditional square tiling, MineSweeper3D includes triangular and pentagonal tilings, which introduce their own challenges. The boards can be rotated in 3D with the mouse, and zoomed in and out. 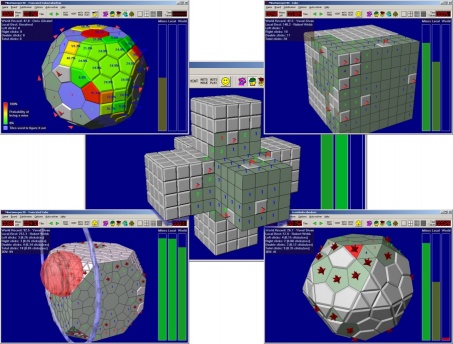 Robert had thought about writing a more traditional 2D minesweeper clone, to make use of additional tilings, but then discovered Professional Minesweeper 1.2 by Bojan Urosevic, which already implemented all the obscure tilings Robert had been interested in. However, with his background in 3D computer graphics, Robert decided to develop this 3D version instead. It was first released in July 2003.

Version 2.0 was released 4 months later, now with a built-in solver, and the addition of Insane! mode, which provided even more mines than Expert mode.

Every attempt was made to copy the look and feel of the original game so that users of the original minesweeper would be able to jump right in and feel right at home. One minor change visually was to use a pale green colour for open tiles. It was deemed too "grey" otherwise, and as the board rotates in 3D shading changes, so some variety in colour was called for.

The mouse buttons act as usual, but may also be used to rotate the board in 3D. If a player left-clicks on an unopened and unflagged tile, then it is opened. Left-click and drag anywhere else and the board is rotated.

A couple of improvements over the game-play of the original minesweeper were included, in cases where it was deemed that the original behaviour was more like a bug than a feature. These include:

As of release 2.6, the game has 45 different 3D board shapes. There are 4 subdivision levels, meaning that each face of the board may be subdivided into multiple tiles, with each edge being divided into 1, 2, 4 or 8 segments. This provides a daunting range of board complexities. The simplest is the tetrahedron at subdivision 1, with just 4 tiles. The most complex is the pentagonal hexecontahedron at subdivision level 8, with a whopping 12960 tiles! To this day the board still hasn't been solved at Expert or Insane! levels.

In addition to all this, each board may be played at the usual minesweeper levels of Beginner, Intermediate or Expert, plus an extra level Insane!. The difference is just in the number of mines which are distributed beneath the tiles.

Combining these choices gives a total of 720 possible boards! A player's fastest times are recorded locally, and world records recorded online, for each of these boards.

World records are maintained online and new records may be submitted from within the program. The submission is encrypted to avoid cheating. The latest world records are also downloaded into the program and displayed for the current board. A player will be informed if one or more of their world records have been beaten.

Current world records may be viewed on this page: [2]

Notice that there are a few boards with no world record. They are yet to be solved by anyone!

MineSweeper3D includes a built-in solver. It may be used for the following tasks: