Mined-Out is a computer game written by Ian Andrew in 1983 for Quicksilva, released for the ZX Spectrum computer. The player attempts to cross a field of hidden mines using numbers as hints. It is the earliest known game of this type, and likely inspired other grid crossing games such as Relentless Logic which eventually led to the creation of Windows Minesweeper.

The object of the game is to safely cross a mine field. The mine field is surrounded by a fence, and the player crosses from an opening at the bottom of the screen to an opening at the top of the screen. After each move the game tells you the number of mines adjacent to your location. The bottom and top rows are always safe, and the highest number is 4 because the game does not count mines diagonally. After crossing the mine field the player is rewarded with speed points and moves on to the next level.

The grid for each level is 19x30 of which 17x30 contains mines. Starting on Level 2 each grid has two female worms waiting to be rescued. Navigating to these damsels rewards the player with bonus points. Level 3 introduces a Mine Spreader that places more mines if the player is slow. These new mines are visible, but the Mine Spreader will also change the locations of hidden mines. This makes the game more difficult than Minesweeper, because you can not mark the locations of mines and you only know the number of mines touching your current square. Level 4 introduces a Bug, which is a mine with legs that follows your path. If you are caught, the game ends. On Level 6 your path starts disappearing behind you, making it very difficult to remember solved mine locations. If you successfully finish Level 9 you rescue Bill the Worm. If you lose, you can save your high score and watch a video replay of your game.

Each release for a different computer system has its own set of keyboad controls, but the player only needs to navigate left, right, up and down. Other game controls are for speeding up or ending game replays so the player can start a new game sooner. There are sound effects throughout the game, mostly various beeps and explosions. The release for the BBC Micro plays the opening line of "2001: A Space Odyssey" when you enter a new Highscore. The original Spectrum version counts the fence as a mine but the BBC Micro version corrects this mistake. Other differences between versions include varying levels of graphics quality, changes to text and the number of levels.

Ian Andrew (UK) always had a fascination for games and in 1969 built his first, a pinball machine made out of wood. He then started writing maze puzzles for magazines. 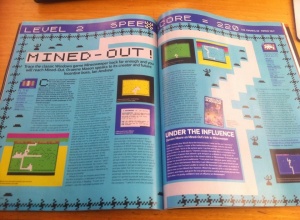 Ian was among the first people to buy the Sinclair ZX81 when it was released in March 1981. This was a black and white computer with 1kb of memory, able to display 24x32 characters. Ian taught himself how to program in BASIC and started writing games as a hobby. In April 1982 the colour ZX Spectrum 48k was released and he quickly purchased machine number 638. Combining his love for puzzles and games, he came up with the idea of using clues to cross a minefield. As Ian explained to this website, "The game came to be as the spectrum had a character based screen when working in basic - and it seemed to lend itself to a logic type puzzle."

The original version had a single level, with the game using the full 24x32 screen but the minefield being 19x30 due to space for messages and the fence surrounding the minefield. Beta testing was performed by his mother, and once she mastered the game he decided it needed more levels. In a May 1985 interview with CRASH magazine Ian stated, "Mined-Out was deliberately different to the games available for the Spectrum in those days" since "generally games only had one level and just got faster the longer you played them. I wrote Mined-Out as a one-level game originally and my mother tested it out for me. Quite soon she had mastered it, so I added another level and it went on until there were eight levels in all." The marketed version in the end had 9 levels and the cover showed a topless girl, of which Ian recalls, "my mother did not approve!"

Ian submitted the game to Quiksilva in response to an advertisement and Mined-Out was published in March 1983 at a retail price of £4.95. The story about the worm was created by Mark Eyles, a Quiksilva employee. This was the 6th game released by Quiksilva for the Spectrum. The earliest known advert was in the March 8-14th edition of Home Computing Weekly and the popularity of the game led to several versions being released by Quiksilva for different computers. The first was a port to the BBC Micro Model B by Ian Rowlings, published in October 1983 (£6.95, 9 levels). This was followed by a release for the BBC Electron in January 1984 (£6.95), a port to the Dragon by brother Chris Andrew in March 1984 (£5.95, 7 levels), a version for the Lynx at least by June 1984 (£6.95) and finally for the Oric in July 1984 (£6.95, 8 levels).

In addition to the official UK releases, the Spectrum version was sold by several other publishers. It appears to have been sold first by Microparadise Software (1983), which translated the cover and instructions into Spanish but not the game. A full translation into Spanish was then sold by Investronica SA as 'Campo de Minas' (1983) with Quiksilva in return translating their 'Bugaboo' into English and selling in the UK. Another Spanish release was by Monser SA as 'Campo Minado' (1985, 9 levels), although screens in the game call it 'Campo Explosivo' and there are additional graphics and programming by Manuel Gomez Amate. In the UK it was re-released by Your Sinclair magazine as part of a games compilation (Dec 1991).

The success of the game inspired Ian to found Incentive Software in 1983.

Mined-Out is the first known computer game where a player must cross a field of mines using number clues. It almost certainly inspired Relentless Logic (1985), a precursor of Windows Minesweeper (1990), that also featured a field of mines to be crossed, warning the player of adjacent mines in the same manner. It is interesting that one Spanish re-release named it 'Campo de Minas' (Field of Mines), which is the translation of Minesweeper in other languages such as 'Campo Minato' in Italian and 'Campo Minado' in Portuguese.

Copies of the original game tape are available online. To play on modern computers you can download the files here and open with an emulator. There are many emulators online, some are suggested here.

Mined-Out inspired several copycat versions. You can play most of the Spectrum clones using the free Eighty-One emulator. One version though requires a TR-DOS emulator (such as Spectaculator). In addition to those listed below, there was also a clone called 'Mine-Field' released by VideoSpectrum in 1984 in Spain that no longer exists. You can also argue that Relentless Logic and all its clones leading up to the creation of Windows Minesweeper are variations of Mined-Out.