Minesweeper was a Yahoo! Club founded on 8 Mar 2000 by Earthboar (Gregory Lewis). It was the most popular minesweeper club with 44 members who shared game screenshots and personal records. It effectively died in 2002 when Yahoo! bought eGroups. 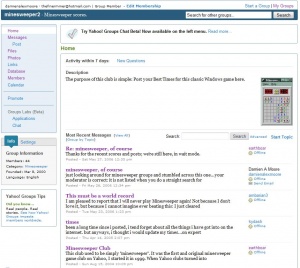 Minesweeper Club was one of the first minesweeper communities on the internet. Gregory Lewis (USA) founded it on 8 Mar 2000 according to Yahoo!, but it appears the group actually started in 1999. From 2000-2002 there were 88 posts from its 30 members.

Yahoo! bought eGroups in 2001 and merged it with Clubs in 2002, calling the new community Yahoo! Groups. There already was a minesweeper group for ships and the club was renamed 'minesweeper2'. As the admin wrote,

The search engine matched keywords exactly, so a search for 'minesweeper' could not find the renamed group. In addition, eGroups already had a very popular minesweeper group called Minesweeper Addicts. Gregory soon changed his mind about the new name:

In the end, minesweeper2 died after only 11 posts were made in the next 4 years. The final message, written by Gregory on 26 May 2006, stated, "we're still here, in wait mode."

Several messages in the group are interesting for historical reasons. Members of the group were the first to find the Timer Lag bug and the first to talk about custom density records. The three minesweeper clubs at Yahoo! (including also Minesweeperclub and Minsweeper were all absorbed into Minesweeper Addicts.