Minesweeperclub was an online club for minesweeper players. It was founded by "Liuchess" on 11 Jan 2000 and was one of three minesweeper groups created at Yahoo! Clubs. The community effectively ended in 2002 when Yahoo! created Groups. 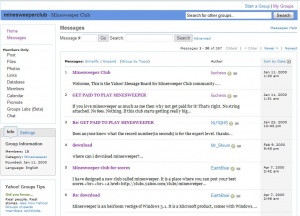 Minesweeperclub was the first minesweeper group at Yahoo! Clubs but it did not become popular. Members posted only 15 messages in the first 2 years and did not upload files or share scores. Most people at Clubs instead joined its rival Minesweeper and some joined another club called Minsweepers.

Yahoo! bought eGroups in 2001 and merged it with Clubs in 2002, calling the new community Yahoo! Groups. The search engine matched keywords exactly, so a search for "minesweeper" did not find "minesweeperclub". In addition, eGroups already had a very popular minesweeper group called Minesweeper Addicts. Minesweeperclub died quickly and only 2 members joined the group in the next 4 years. It still exists but all messages are spam.

Two posts are interesting for historical reasons. The creator of rival club Minesweeper invited members to his group on 7 Apr 2000, and the founder of Minesweeper Addicts did the same on 27 Jul 2001.

You can download all minesweeper posts from minesweeperclub in a Word document. Spam messages have been deleted.