Minsweepers was a Yahoo! Club for minesweeper created on 3 Dec 2000 by 'minesweeperus' (Mohammad Meysami). It effectively died in 2002 when Yahoo! bought eGroups. 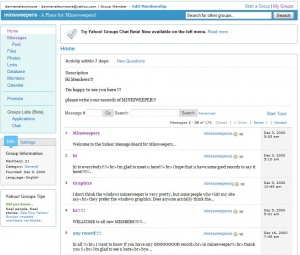 Minsweepers was the least popular of the three minesweeper Yahoo! Clubs. The group only posted 9 messages in the first two years, most of them by the admin asking for time records. Three people shared scores, and only one picture was uploaded. Nearly all messages are spam from dating sites. Most minesweeper players instead joined rival clubs Minesweeperclub and Minesweeper.

The demise of these clubs occured when Yahoo bought eGroups in 2001 and merged it with Clubs the following year. Due to early keyword matching, the new group could not be found by a simple search for Minesweeper. Additionally, eGroups already contained a popular Minesweeper group known as the Minesweeper Addicts.

The one historically interesting post came from Richard Cross, who wrote 3 Dec 2000 asking about minesweeper skins for Lady Di Mines.

You can download all minesweeper posts and pictures from minsweepers in a Word document.