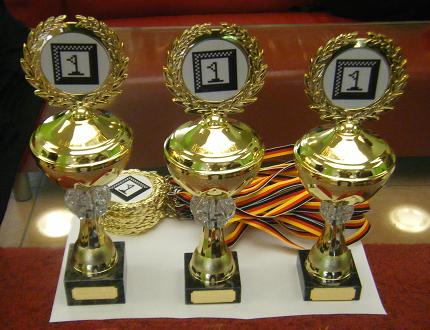 Trophies given at Munich 2010

The minesweeper community wished tournaments were possible for many years, but it was not until 2004 that it became a serious possibility.

The first person to suggest a minesweeper meeting and competition was Christoph Nikolaus (Austria) on 23 Mar 2004. He booked a computer lab at the University of Vienna for 9 May but offered other dates. Many players were excited but said they could not come because of distance or money. Dave Matson (Canada) said it should be called the 'World Championship' to attract sponsors, and Gergely Nagy (Hungary) said mouse makers should be asked for support. Lance Votroubek (USA) said he would consider hosting a competition for American sweepers. Christoph announced on 1 April that the tournament would happen if 8 players registered, and the format would be a sum of 6 Intermediate and 3 Expert games. A room was booked for 1000 to 1800 with three 2 hour sessions for Intermediate, Expert, and either level. Stevan Gvozdenovic (Montenegro) proposed playing 5 games of each level, and Rodrigo Camargo (Brazil) suggested there should be various types of contest at the tournament and gave examples of different playoff formats. Christoph replied that having previously organised tournaments for other games, he wanted to keep it simple and neutral for both Flaggers and NF players. It was also true that players compare times to gauge greatness. He did offer a choice of 3 or 5 Expert, and offered to make shirts for competitors. On 4 April he created a site for the tournament (minesweeper.dotti.at). By the 19th only 4 players had registered so a deadline was set for that Friday.

Rodrigo released an online multiplayer version of his new Minesweeper Clone on 10 April. This prompted Gergely to suggest on 29 April the possibility of online tournaments. Christoph and Rodrigo then discussed several ways to adapt the Clone or the website to host such a competition. Nothing happened for a few months.

Christoph then posted in the Guestbook on 9 Jul 2004 that he still wanted to organise a tournament and asked interested players to email him. Daniel Lynch (Ireland) suggested calling it the 'Minesweeper World Championship' and approaching Logitech and Microsoft to sponsor the event, and he contacted Microsoft Ireland about sponsorship. Christoph noticed the choice of sponsor might mean some players could not use their own mouses. After a holiday, he announced 10 August he was unable to find a sponsor but the tournament would take place on 18 September if enough players could come. On 15 August he announced the competition was cancelled.

Gergely Nagy announced 15 Nov 2004 that a tournament was going to take place in Budapest in February, with details to come shortly. Several players were interested. On the 30th he wrote that companies had been contacted but sponsorship would only be enough to pay for the room. The competition would definitely go ahead as local players had agreed to compete, and if it was a success he promised to host more. He soon confirmed 26 Feb 2005 as the date. After a month of exams he posted a website (geocities.com/aknakereso) for the tournament where players could register, and announced accomodation for 8 Euro a night.

By the start of February there were 8 world ranked players planning to attend and many Hungarians. Roman cancelled on the 1st but was able to buy flights two weeks later. Oli and Robert booked the same flight for the 26th, but Oli was late and Robert missed the flight waiting for him. Martin also did not arrive. The international players to arrive were Damien, Roman and Christoph but there was strong competition from Gyula, Gergely, Istvan and 13 more Hungarians. The competition used Minesweeper Clone and took 3 hours. Players were ranked by the sum of their fastest 5 Intermediate and 5 Expert games. Trophies were given to the winners (Damien, Gyula, Roman) and everyone received certificates. Detailed results and reports by the players are linked at the end of this article.

The Budapest tournament was a great success, and Christoph immediately announced Vienna 2005. Since then there has been at least one tournament each year, with no two being the same! Different formats and prizes have been tried as follows:

The other way to host a tournament is in a Playoff format. So far, no two have been the same! Vienna 07 seeded players according to results from a 5&5 qualifying round. The 8 qualifiers were placed in the Quarterfinals, with the winners of each progressing to the Semifinals then the Final. In each round the winner was first to complete 15 Beginner, 6 Intermediate and 2 Expert games. Vienna 08 had rounds made of 999 seconds where players tried to complete 10 Beginner, 6 Intermediate and 2 Expert and then could play any level until time expired. After each round players were awarded points depending on how many players they beat for total time, best 5 Beginner sum, best 5 Intermediate sum, and best 5 Expert sum (unfinished games penalised 999.99 seconds). Each time the current leader reached a set number of points, players with the least points were dropped until only the winner remained. Budapest 08 took place at a games fair. Players had 10 minutes to play Intermediate and the fastest 8 were invited to the Playoff. Players went head-to-head to complete 5 Beginner, 3 Intermediate and 1 Expert. The Final took place on stage in front of an audience.

There were no prizes at the first tournaments but awards are now standard. Most competitions give all players certificates for attending, with prizes having ranged from a single computer mouse to expensive software.

Most tournaments require players to win a number of games. A time penalty is usually given for unfinished games. Budapest 05/06 gave a penalty of your slowest Expert game + 40.00 seconds for each unfinished game, but if you failed to complete 5 Intermediate and at least 3 Expert you received a DNF (Did Not Finish). Moscow 08 and Munich 10 gave 999.00 seconds. Budapest 07, Shanghai 07 and UK 09 gave 999.99 seconds for any unfinished game. Moscow 09/10/11 and UK 11 gave 999.999 seconds. Vienna 05 gave players a DNF and resolved ties by number of games finished.

Vienna 06 and Moscow 07 saw everyone finish their games, so it is unclear what penalty would have applied. Vienna 07/08 and Budapest 08 were Playoffs so there were no penalties (although Vienna 08 did give 999.99 penalties for the Expert ranking in each round).

Nonosweeper is a popular variant of minesweeper and is often played at tournaments, usually on the following day. Competitions with a nonosweeper event were Vienna 05/06/07/08, Budapest 06 and Munich 10.

Minesweeper Live allows two players to play the same board seperately at the same time, and lets them see the other player solving the board. The ranking of each player is adjusted depending on who won and the previous ranking of the players.

The first MSLive competition (Russia Cup 1) took place in December 2006 and featured 9 Russian players seeded according to their country ranking. Divided into two groups, each person played the other in a "first to win 4 games" round robin. The top 2 players in each group faced off in a "first to win 10", and then the same took place in the final.

The second MSLive tournament took place in January 2010. The admin seeded 21 international players by their MSLive ranking into 4 groups. This round robin stage placed players in a group against each other, "first to win 5" games or until a 2 game winning margin was reached. The best 2 in each group reached the knock-out quartfinals, with the "first to win 10" proceeding to the seminfinals then final.

The third tournament (Russia Cup 2) took place in February 2008 and featured 10 players. The format was like the original Russia Cup except the round robin was "first to win 5", and the best 4 in each group went into the quartfinals.

The fourth competition (Russia Cup 3) took place from February to April 2009 with 16 players competiting. This time they were divided into 4 groups in a "first to win 5" format, with the best 2 in each group progressing to the quartfinals an so on to the final.

The fifth MSLive competition was organised by name removed and started in April 2010, lasting until July 2010. name removed selected 16 of the top players from the Active Ranking and divided them into 4 groups of 4 players. In each group the players competed head-to-head for a best of 19 Expert games. The best 2 in each group went into a new group of 4 players, this time with a best of 25 games. The next round was 29 games, then the final (and 3rd place match) a best of 36 games. The final (between Kamil and Manuel) was never played.

This site divides players into 3 Leagues (Beginner, Amateur, Professional) and they compete in categories. The first 3 categories are best times for Beginner, Intermediate and Expert. The other 3 categories are time trials where players are ranked by fastest time to complete a number of boards. For example, players have a 10 minute time limit to finish 16 Beginner, or 4 Intermediate, or 2 Expert games and your timer stops when you meet the target. The sweepers in each League are then ranked by the total of their ranks in the 6 categories. This 'Championship' is monthly, and is a type of Active Ranking. The site is run by Boris Gvozdev.

There have been four Austrian championships organised by Christoph. The event usually occurs just before the Vienna international tournament and involves from 3 to 5 players. In 2007 it featured a best 5&5 format won by Thomas Kolar, with Christoph and Andreas Marx taking 2nd and 3rd respectively. In 2008 the same three players used it to test the program used at Vienna 2008.

Christoph visited Damien in Edinburgh on 26 Nov 2005, and during the visit they played minesweeper on a laptop in Burger King. Christoph managed a 59 and Damien a 52. They joked about starting a Burger King ranking, but did not take it seriously. Christoph later visited Daniel Lynch in Leipzig on 17 Feb 2006 and they competed against each other in a McDonald restaurant. After this, Christoph started a ranking on his website (www.dotti.at/ms). The ranking expanded to include his visits with Oli Scheer (2005) in Berlin and Tommy Kolar in Vienna (5 Jun 2006). Some Australian players also met in a fast food restaurant in Sydney (2006) and so Dion Tiu, Andrew McCauley and Benny Benjamin joined the ranking.

There have been regular online Nonosweeper tournaments since December 2004. Players are given a new grid and density for each tournament and compete in divisions based on skill. Each tournament lasts a week and every 8 weeks a new Season starts.

From July 2008 until July 2009 the Minesweeper Facebook Page hosted 7 competitions. For each season a grid size and density were chosen and players had several weeks to submit the best time on that level. This continued until Facebook closed access to the page, claiming that only Microsoft had the right to operate the fan page.

To read pages in other languages, copy link into Google Translate.

This is a list of personal meetings for which players reported or submitted pictures. Other meetings have taken place; for example, Roman Gammel met 8 Sub90 Expert players at Moscow University, Daniel Lynch met Grégoire Duffez in Paris in Nov 2004, and Owen Fox met Lasse Nyholm in Aug 2001 in Denmark.