Minesweeper - The Unofficial Page was an important early minesweeper site. Created by Patrick Fox on 24 Oct 1996, it was maintained until 11 Mar 2000. 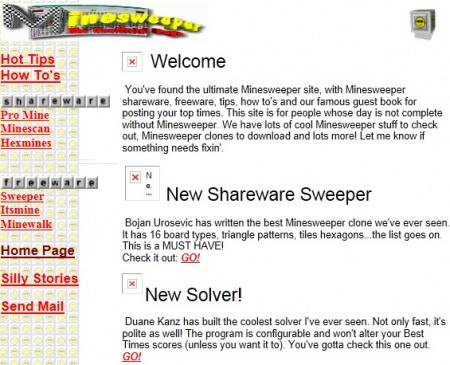 Patrick Fox (USA) originally created the site for his daughter, who had "been known to play for hours at a stretch" and made him "dizzy to watch her play". At first he included many links to various puzzle games, but eventually concentrated on providing detailed reviews and downloads of minesweeper solvers and variants. The 'Tips' section consisted of a letter by top ranked player Ricardo Galletti describing his score progress. The site also included an interesting Guestbook. The final update simply announced that "I am no longer supporting this page, nor even using Windows!" Later that year it was deleted.

The site was one of the first serious minesweeper pages and had the first known Guestbook for the community. It directly inspired the creation of Minesweeper Tips by Brian Chu.

This site can now be found in the minesweeper archive.