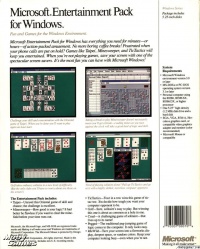 Minesweeper was released 8 Oct 1990 when Microsoft published the first Windows Entertainment Pack. WEP was the first set of games developed specifically to run in Windows rather than in DOS. There were four issues:

WEP introduced Minesweeer but it was another two years before the game gained international recognition when it came bundled with the release of Windows 3.1 on 6 Apr 1992. Microsoft has continued to release Minesweeper with new editions of Windows. In 1994 the most popular WEP games were collected and sold as BOWEP but Minesweeper was already part of Windows and not included.